Paul Nagy has been living in Paris since 1956. He had been researching at French libraries for ten years in order to collect correspondences and texts of Hungarian royals and famous ones written in French to royals, politicians, high ranking military officers, artists, writers, institutions, friends and so on. That unique collection has been published in French titled "Une francophonie millénaire" by Honoré Champion publisher. The anthology covers the period from sixteenth century to early twentieth century. The book was published with the support of our foundation. 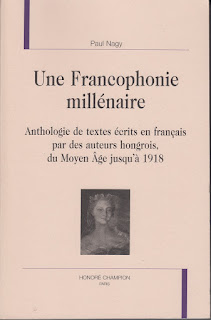 Paul Nagy writer, translator of literary and poetic works. He and Tibor Papp founded magazine Magyar Műhely in 1962 and sister magazine L'Atelier in 1972 respectively. His second anthology covering the texts of twentieth century writings and correspondences already has been in preparation.
Posted by Wagner Nándor at 10:36 No comments: